“There’s nothing to prove anymore, all that’s left to do is enjoy”

I have been on the road for five months now and the time has flown by.  Most of that time  has been with family (Yuma), at an RV rally (Tucson), camping with new friends (Casa Grande), and having a few road queens (Sandy and Jane) travel with me. Up until now, I haven’t actually spent that much time by myself.  It’s been interesting being totally alone.  I find myself being lazy or maybe I’m just tired from all the activity since leaving Sacramento!  I certainly was not this active at home.  I’m trying to make the transition from a “perpetual vacation” to regular life, just in a home on wheels.  In my regular life I wasn’t going and doing all the time. When in the RV, I feel like I’m wasting time when I’m not going somewhere or doing somewhere. I’ve read that it takes six to nine months to fully adjust to this lifestyle.

During my travels I’m  getting a good dose of small town America.  As you can imagine, I’ve had some interesting conversations with people that are not my peeps.  I’ve been taking an observer position and trying to understand the Trump supporter mind set.  It’s almost exclusively men that bring it up.  My response is, “I have a personal policy of not discussing politics or religion”, yet they  still  feel it necessary to continue defending Trump.  Short of getting up to leave, I cannot get them to shut up.  (What’s new, right?) I guess I’m still a city girl and I definitely live in the right state.  There’s no doubt that I will return to California when I am finished with this adventure. I miss California very much!

I stayed in Panguitch for two weeks.  In 2006, Panguitch was listed as a historic district in the National Register of Historic Places. The history of Panguitch is interesting.  Panguitch is a Native America word meaning big fish.  Mormons settled the area in March, 1864.  The first winter was exceptionally cold and hard.  Crops had failed and people were hungry.  Seven men braved the elements to get flour in Parowan, another Mormon settlement about 40 miles away, over what is now Highway 20.  The snow was so deep they had to abandon their oxen and wagon.  They were able to reach Parowan by placing a quilt on the snow, walking to the end of the quilt,  placing another down, and retrieving the first.  This became known as the Panguitch Quilt Walk and is still celebrated today.

I was able to attend the weekend celebration that included many activities, a quilt show and a dinner theatre telling the story of the quilt walk.  I was touched by the celebration of the townspeople’s ancestors.  There were descendants of the original settlers in the play.  What a wonderful tradition! 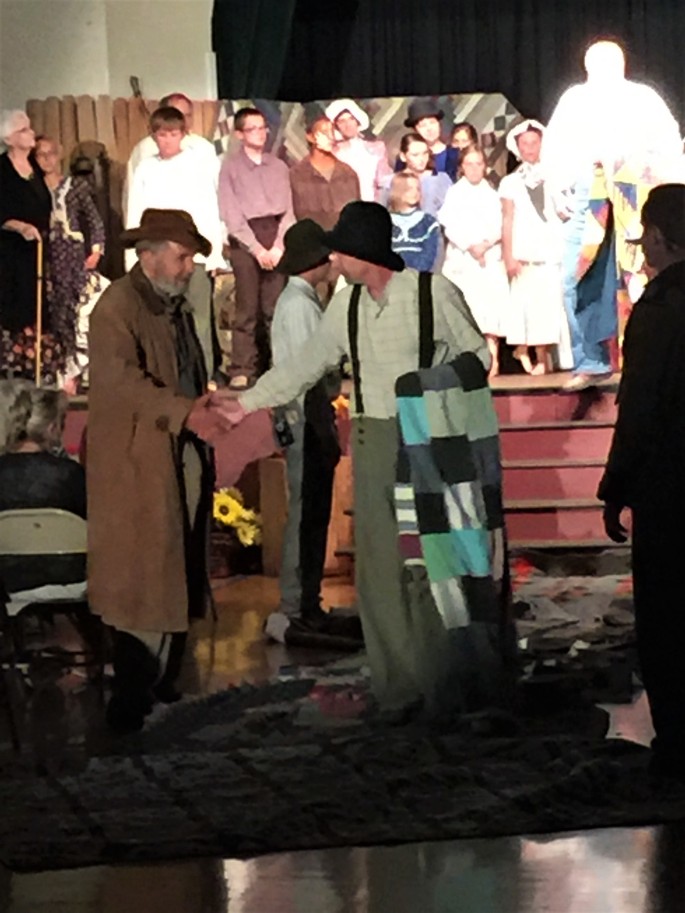 Ralph and I stayed in Panguitch when we took the RV and motorcycle on the Grand Circle  four years ago.    I stayed at the same campground, the Hitch N Post in beautiful downtown Panguitch.  I’ve started to rate these small towns by whether there is a Walmart or not.  You know a town is really small if they do not have a Walmart.  I don’t like shopping at Walmart due to their employment policies.  However, I do understand that

in some areas Walmart is the best employer and the best shopping.  As with everything in life, it’s a tradeoff.

I chose Panguitch because it is a good basecamp for visiting Bryce Canyon NP, Red Canyon, Grand Staircase Escalante National Monument, Kodachrome State Park, Cedar Breaks NM and Willis Creek Canyon.   Zion NP is within driving distance too.  I have been to Zion before so I chose not to visit on this trip.

The weather has been extremely hot and summer camping season is in full swing so it’s getting harder to find campgrounds. State parks are fully booked.  I’ve read how full-timers hate summer because it is much more difficult to find last minute campsite availability.  Part of the appeal of this lifestyle is that you can navigate by serendipity.  If you have to plan and reserve campsites months in advance…well… that’s the exact opposite of serendipity!    I haven’t been able to boondock without hookups because I need to have electricity for air conditioning.  So, that means RV parks that are more expensive than national forest campgrounds and dispersed camping in the wild.

Panguitch is located near the intersection of Hwy 89 and Hwy 12.  Scenic Byway 12 is 124 miles  long and travels through some of the most diverse, remote and ruggedly beautiful landscapes in the country. It is home to two national parks, three state parks, a national recreation area, a national monument and a national forest.  I saw rolling slickrock, colorful buttes and mesas, snaking canyons and rock walls varnished with mineral stains.  I traveled the scenic byway from Panguitch to the summit at Powell Point Overlook and The Blues.

The Blues is a badland of gray-green shales deposited some 80 million years ago when the area was covered by an inland ocean. The Blues is one of the best and most continuous records of late Cretaceous life on the planet and has yielded an abundance of dinosaur fossils, including a dozen new species.

My first hike was Red Canyon. I cannot seem to get enough of those red rocks! Red Canyon is made of Claron limestone on the Paunsaugunt Plateau.  It is a variety of weirdly sculpted forms described as turrets, hoodoos, pinnacles or spires.  They extend nearly four miles on top of the plateau edge.  There are great trails to hike, bike and ATV.  Here’s a few photos of Red Canyon and the Arches Trail. 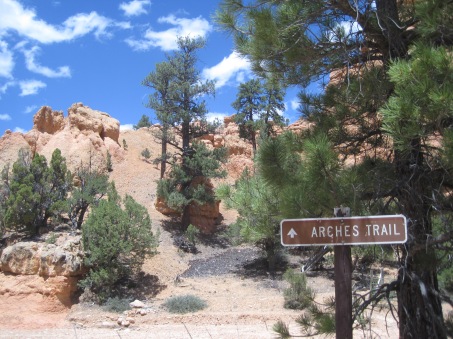 This is Dixie National Forest territory and the Sevier River runs through the area. The landscape is varied and beautiful!  Of course, Bryce Canyon National Park is the crowning jewel of the Panguitch area.

Ralph and I visited Bryce Canyon before and I wanted to return and hike into the canyon. Bryce Canyon is not actually a canyon, but is a series of amphitheaters etched into the pink Claron limestone of the Paunsaugunt Plateau (same as the Red  Canyon). I picked the coolest day of the week, left very early and hiked to the bottom of the canyon.  I loved walking among the giant rocks, pinnacles and hoodoos and soaking in the environment.  It was approximately 3.5 miles; pretty much downhill and, of course, uphill most of the hike. It was a bit challenging, but totally worth it!

Scenic Byway 12 boarders the top of the Grand Staircase Escalante National Monument. Grand Staircase is the flagship unit of the National Landscape Conservation System, one of our nation’s newest conservation initiatives, managed by the Bureau of Land Management (BLM).  It is 1.9 million acres set aside in 1996 to preserve the wide-open spaces and intact ecosystems. The Grand Staircase is a series of massive geological steps that descend toward the Grand Canyon in Arizona.  The five cliff formations – pink, gray, white, vermillion and chocolate- each different chapters of geologic history spanning 100 million years.  This region of silence, space and scenery defies description! I found a great blog post that explains the Grand Staircase better than I ever could.  This is one of the photos from the blog.

There is a Utah state park in the area too. Kodachrome Basin State Park that is definitely worth visiting. The Paul  Simon song, Kodachrome, ran through my mind a hundred times over a few days.  I could not get that song out of my head!  Yes, the park was named after the revolutionary Kodak film that was celebrated for its color accuracy. The park has a series of upright cylindrical chimneys called sandpipes.  More than 160 sandpipes ranging in height from six to 170 feet have been identified in the park.  I took the 3 mile Panorama Trail through the most spectacular scenery. On my hike I ran into a couple that I met on the trail in Bryce.  Small hiking world!  People are very friendly on the trails and I acquire a lot of good information from people I have a ten minute relationship!

The couple I met in Bryce told me not to miss the Willis Creek hike. They said It was worth the long drive down a dirt road to the trailhead. It certainly was!  The creek has carved its way through the rocks, creating a slot canyon.  At certain times of the year you must wade through the creek.  This time of year the creek is barely flowing and you can use the rocks in the creek to cross from one side to the other to make your way through the slot canyon.  I love slot canyons but don’t hike them very often because access is either way off the beaten path, or a hard hike to get to them.  This one was accessible and  an awesome hike.

I took the 60 mile drive to Cedar Breaks National Monument. This great natural rock amphitheater of extraordinary forms wrapped in brilliant colors is a must see.  The Cedar Breaks amphitheater is a result of many of the same forces that created other great Southwestern landscapes, including the Grand Canyon, Zion Canyon, and the Bryce amphitheater. Cedar Breaks is like a mini Bryce Canyon.

Shaped like a huge coliseum, the amphitheater is over 2,000 feet deep and over three miles in diameter. Millions of years of deposition, uplift, and erosion carved this huge bowl in the steep west-facing side of the 10,000-foot-high Markagunt Plateau. Stone spires stand like statues in a gallery alongside columns, arches, and canyons. These intricate formations are the result of erosion by rain, ice, and wind. Saturating the rock is a color scheme as striking as any on the Colorado Plateau. Varying combinations of iron and manganese give the rock its different reds, yellows, and purples.

According to the park brochure, “Among the region’s original residents are the Southern Paiutes, who called Cedar Breaks u-map-wich, “the place where the rocks are sliding down all the time.” Later settlers named it Cedar Breaks, misidentifying the area’s juniper trees as cedars. Breaks, another word for badlands, is a geologic term describing heavily eroded, inhospitable terrain. President Franklin D. Roosevelt established Cedar Breaks National Monument in 1933, calling nationwide attention to its spectacular amphitheater.”

Southern Utah is a unique place and if you haven’t been to this area, you should put it on your list!

My next home will be 70 miles north of Panguitch in the small town of Richfield, Utah.  I’ll stay there until July 10.  And this town is big enough to have a Home Depot and a Walmart.  Yipee!