As much as I love the Sedona area, it was getting very warm there and I was finished with the Elks Lodge camping.  I decided to head to Flagstaff and the Bonito National Campground.  The elevation in Flagstaff is 7000 feet and the temperature is cooler than Sedona.  The Bonito campground offers only dry camping and is located at the entrance of Sunset Crater Volcano National Monument. The campground is 12 miles north of Flagstaff and is nestled in the pine trees with nice separation between the sites.  Since the weather is cooler there was no need for electricity for air conditioning.

My new friend, Malia Lane, drove up from Sedona for the day and we toured the Sunset Crater Volcano and the Wuatki Ruins. Malia has been full-time RVing for 16 years as a solo.  I’ve read her blog for a few years and actually she is the one that inspired me to travel solo.  We are the same age, drive similar sized rigs and tow a vehicle.  She answered many of my questions and I decided, “If she can do it, so can I!”  Malia is a wonderful writer and you can read her blog, Malia’s Miles here.   I met Malia for the first time in Sedona and we really connected. We are both independent, new age women who came of age in the 1960s.   We also have the same touring style: slow and stop a lot to investigate things. I loved the time we spent together and I know we will meet up sometime in the future. Malia is staying in Sedona for the summer to complete a book she is writing.

The date of the eruptions that formed the 1,120 foot-high cone  was initially derived from tree-ring dates, suggesting the eruption began between the growing seasons of A.D. 1064–1065. However, more recent geologic and archaeological evidence places the eruption around A.D. 1085. The largest vent of the eruption, Sunset Crater itself, was the source of the Bonito and Kana-a lava flows that extended about 1.6 mi NW and 6 mi NE, respectively. The Sunset Crater eruption produced a blanket of ash covering an area of more than 810 sq miles and forced the temporary abandonment of settlements of the local Sinagua people. The volcano has partially revegetated, with pines and wildflowers. Since the last eruption of the volcano is a recent occurrence, it is considered dormant by volcanologists.

The remains of masonry pueblos are still in the area.  In the 1100s Puebloan peoples came together to build a vast farming community.  By 1180, thousands of people were farming the Wupatki area.  By 1250, the people had moved on and the pueblos were abandoned. In 1930, President Hoover established Sunset Crater Volcano National Monument.  Wupaki ruins are well preserved and include two round ball courts and a blow hole where cold air flows out of the earth.  It was fascinating and we could feel the energy of those that came before us. Well worth the visit. 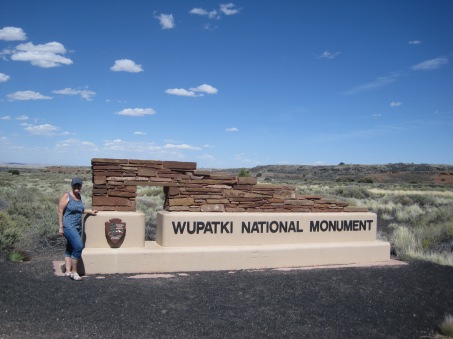 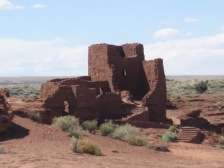 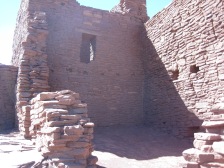 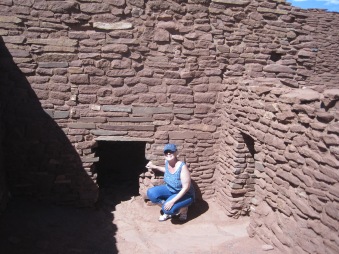 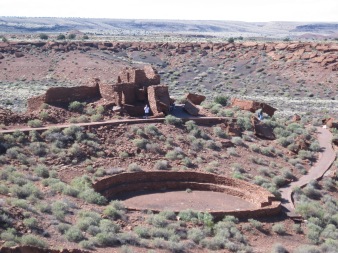 While in Flagstaff I was able to take care of some errands, shopping and visiting with a friend I knew from Rancho Murieta. I finally bit the bullet and bought a new iPad.  I still had an iPad 2 with 16 gig of memory and 3G cellular.  That’s practically an antique!  I purchased the newest iPad with 128 gig and WIFI.  It’s blazing fast compared to my old iPad. Now I have plenty of room for all my travel apps, TV shows and movies for when I dry camp and cannot use my Dish satellite. So far I’m very happy with my purchase.

I met my friend, Sandy, at the Continental Country Club for lunch.  Sandy and I lived in Rancho Murieta at the same time.  Sandy reminded me they left Rancho Murieta 15 years ago!  I couldn’t believe it had been that long.  It was great to catch up and compare retirement.  Sandy and her husband Bob have two homes in Arizona; one in Cottonwood and one in Flagstaff.  They are only 80 miles from each other, but a world apart in climate and temperature due to the difference in elevation.

I stayed in Flagstaff for one week and then I headed to Page, Arizona where Jane, one of my BFFs, joined me for ten days to celebrate her 60th birthday.

I drove the 130 miles from Flagstaff to Page and settled at the Wahweep Campground on Lake Powell before picking Jane up at the airport. We were celebrating her 60th birthday.

The Wahweep Campground is a great campground located on the shores of Lake Powell.  The sites are $44.00 per night and well worth it.  The view from our campground was beautiful. There is also a hotel, restaurant and marina nearby.

While at Lake Powell, we visited the Glen Canyon Dam, Horseshoe Bend, Marble Canyon, Lee’s Ferry and took a boat tour of three canyons. We also hung out with a couple locals one night and had a memorable time.

You can thank the Glen Canyon Dam for the making of Lake Powell.  According to Wiki, Glen Canyon Dam is a concrete arch-gravity dam on the Colorado River in northern Arizona. The 710-foot high dam was built from 1956 to 1966 and forms Lake Powell, one of the largest man-made reservoirs in the U.S. The dam is named for Glen Canyon, a series of deep sandstone gorges now flooded by the reservoir. Lake Powell is named for John Wesley Powell, who in 1869 led the first expedition to traverse the Colorado’s Grand Canyon by boat. Learn more about it here.  Lake Powell is 450 deep in some areas.  The Glen Canyon Recreation Area is very popular, especially with boaters.

We took a lake boat tour and explored three canyons; Glen, Navajo and Antelope canyons. The boat we took had an entirely female crew and the first female Navajo boat captain in the US.  This entire area is in the Navajo Nation. Learn more about the Navajo Nation here. 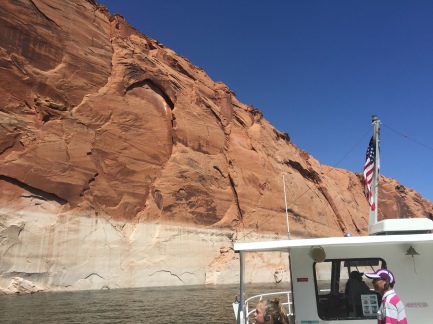 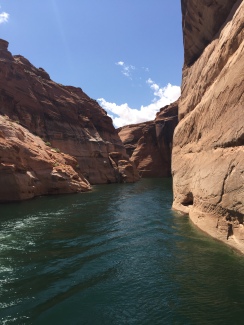 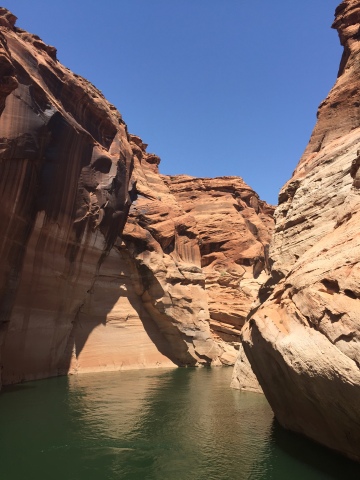 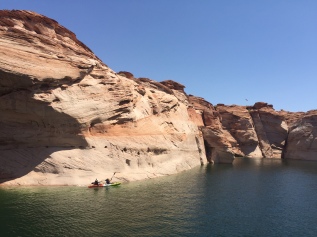 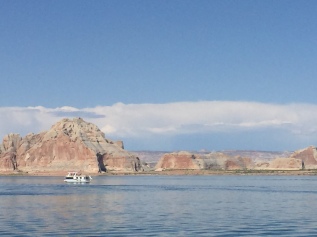 One of the crew invited us to have sushi with her the next evening.  Believe it or not, the sushi was fantastic at the Blue Buddha and Joe, the bartender, made the best Cosmo I’ve ever tasted.  After dinner we went bar hopping in Page. I haven’t been kicked out of a bar in many years. One of us had a little too much to drink (and no, I’m not going to say who), and our little group of four was asked to leave the bar.  We were definitely the minority in Navajo country and had a great time mixing with the locals. We laughed about it for several days afterwards.

I was also able to check off a bucket list item by visiting Horseshoe Bend.  This is an area where the Colorado River curves around an island in horseshoe fashion.  I’m sure you’ve probably seen photos of it.  If not, here you go.

We did some site seeing by driving to Lee’s Ferry and Marble Canyon. Lee’s Ferry is named for its notorious settler, John D. Lee, who established a ferry at the site in the name of The Church of Jesus Christ of Latter-Day Saints. The ferry shut down in the 1920s when the steel span of the Navajo Bridge replaced it providing a breathtaking view of the canyon below. Lee’s Ferry is the put-in point for those rafting down the Colorado River through the Grand Canyon.  It is the only place for 100 miles where you can access the Colorado River.  We dipped our toes in the river and it was very cold.  I was told it was 46 degrees.  I thought there was a town there, but alas, there was not. 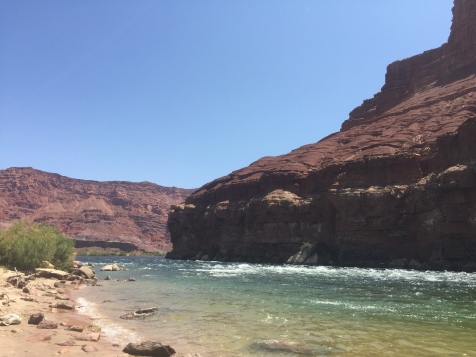 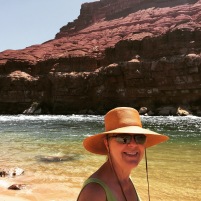 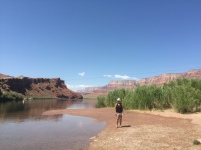 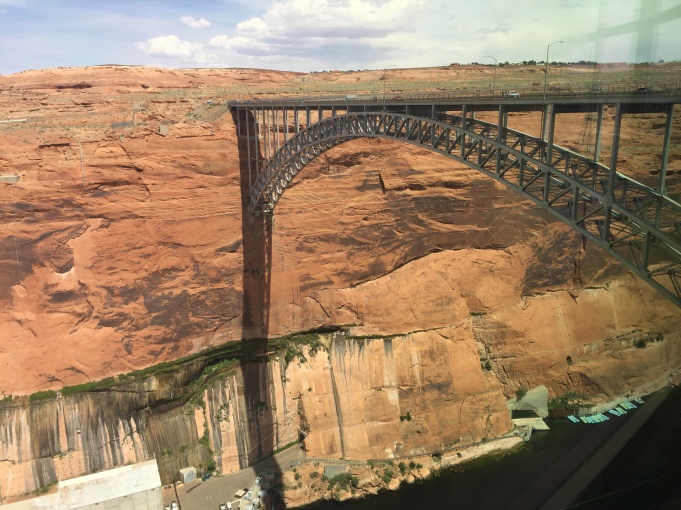 Nearby is Marble Canyon with a resort and restaurant where we had a delicious lunch.  Marble Canyon, so named for its colorful rocks and cliff walls, is just below Glen Canyon Dam. Along with Lee’s Ferry, Marble Canyon marks the beginning of the Grand Canyon at its most eastern point. 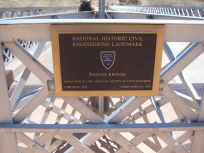 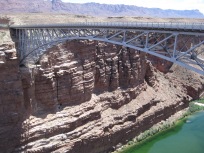 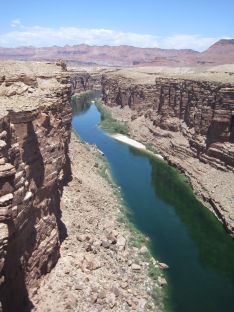 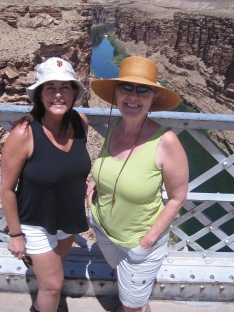 After spending a week in our great camping site at Wahweep, it was time to head to Kanab, Utah so we could visit the north rim of the Grand Canyon.

The scenic drive north on Hwy 89 was a short 75 miles.  We stayed at the Kanab RV Corral for three days. It was an 80 mile drive through forest to the north rim of the Grand Canyon for Jane’s 60th birthday.  We took the short, but strenuous, hike along the ridge overlooking the canyon. On the hike we met a man who had bicycled from Oklahoma!  I can’t even imagine. We reserved the best seat at the Grand Canyon North Rim Lodge and had a delicious dinner overlooking the canyon. We reminisced about Jane’s 50th birthday in Venice, Italy when we spent a week there and had a costume ball the day of her birthday. Where will be celebrate her 70th???

We had  such a great time.  I love having my friends visit. The next day I drove Jane back to Page to fly home.  When I returned to the rig, I prepared to leave the next day for Panguitch, Utah just outside Bryce Canyon.