How did I end up in Mexico?  That’s a good question!

First of all, I did not drive my motorhome to Mexico (yet).  I flew from Phoenix to Guadalajara.

The idea for the trip was hatched the night of the election.   I was at the Placer County Democratic election gathering and the night started out well.  But as you well know, it didn’t turn out well for us Hillary supporters. After the election,  one of my bookies (book club friend),  Jean decided to go to Mexico.  When she mentioned it to me I said, “I’m in!”  Turns out the trip was to San Miguel de Allende.

I have been toying with the idea of moving to Mexico for a couple of years (even before the election).  I have been researching different places, reading blogs and Facebook groups and trying to learn as much as I could about the realities of living in Mexico as an ex pat.  I was particularly interested in Ajijic, on Lake Chapala and  San Miguel de Allende.  Another bookie, Lynn and her friend Jean joined in and before we knew it,  seven of us were going for a week in San Miguel.  Lynn, Jean, Jean (yes two Jeans!)  and I decided to take another week and visit Lake Chapala and Morelia.  A work associate and friend, Michael has lived in Morelia for 13 years .  I have enjoyed reading his Facebook posts and his wonderful photography and he made Morelia look like a place I wanted to visit.

The plan came together.  Ajijic for three days, Morelia for four days, and San Miguel for one week. 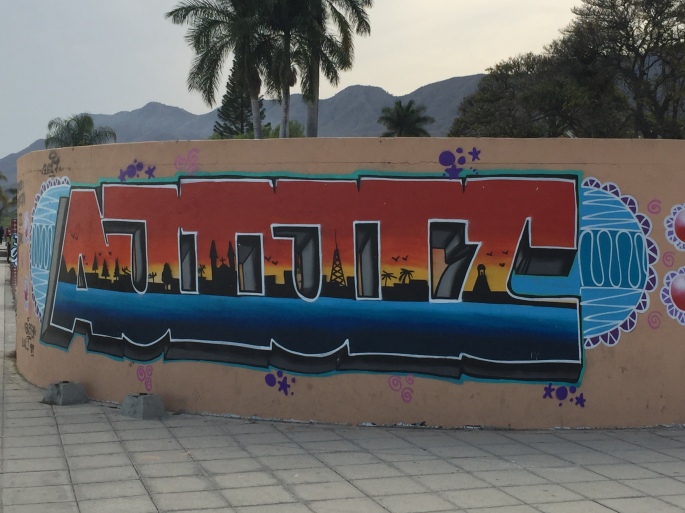 The two towns on Lake Chapala with large ex pat populations are Ajijic and Chapala. There are 20,000 English-speaking ex pats living in the area. Learn more about Ajijic here. We chose Ajijic to visit and I found a small, boutique hotel on the lake.  La Nueva Posada, owned by a Canadian was a lovely hotel with an excellent restaurant.  A large breakfast was included and the price was $65 USD per night. We were very happy with our home base while visiting Ajijic.  The hotel also has long-term rentals that include housekeeping every day and breakfast.  You can also order food from the restaurant for delivery. We met a woman at the ATM who is one of those long-term renters.  She invited us over to see her one bedroom apartment ($800 USD/month) and another woman let us see her two-bedroom apartment ($950 USD/month). They were quite nice.

Lake Chapala is the largest fresh water lake in Mexico and the elevation is around 6,000 feet, making the weather nice all year long.  The “rainy” season generally runs from May-Oct and the mountains surrounding Lake Chapala become green.

We could walk everywhere and we did our bit to simulate the economy in this lovely small town.  I like the city centers because they give you the feel of being in Mexico.  There are numerous modern housing developments surrounding the city center.  These gated communities could be anywhere in the US (where is weather is nice all year round).  These developments are full of Canadians and Americans.  Not where I would want to live. Two reasons people move to places like Ajijic; the great weather and it’s inexpensive!  About one-half the price of goods and services in the US.  You can live very well on just a decent social security income.  Many do!

Here are some of the sites around Ajijic.


Even though we only spent three days in Ajijic, we got a good feel for the area.  We met several women in our age group that were visiting, or lived in Ajijic. We felt making friends would be easy, if indeed, we did live in Ajijic.

While in Ajijic, we went horseback riding along the lake and on the streets in town. Let’s just say it wasn’t the fantasy of riding a beautiful horse along the shoreline with our long blond hair dancing in the breeze.  But, it was pretty cool.   And I was reminded of why I gave up my horses 20 years ago.  My butt hurt, my knees hurt, and I was grateful to get off!

We took the opportunity to investigate real estate in the area.  Prices are very reasonable compared to California.  However, it is probably a better idea to rent for a year or two before investing in real estate in Mexico.

Before we knew it, it was time to leave for Morelia. We hired a car and driver to take us to Morelia, a beautiful colonial city in Southern Mexico in the state of Michoacán.  A friend moved here 13 years ago and was our tour guide and translator for the four days.  Morelia reminded me so much of Madrid.  Dah!  The Spanish colonized (a nice word for stole, pillaged and enslaved the natives) the area.  The upside of the colonialization is the beautiful buildings and churches left behind.  My friend, Michael Dunham is retired now and is a very talented photographer and is connected to the music scene in Morelia.  You can view his photos on his website.  Michael recommended a friend’s B&B, Casa Xola and we were able to get three rooms.  Arliegh, our host, was a delightful Canadian woman and we loved her beautiful house.  Arleigh and Michael took two of us to neighboring villages to see their artesian wares.  Jeannie and I were under the weather and couldn’t go.  They had a fantastic time and did their best to stimulate the Michoacán economy.

We visited the local merchado.  So colorful! 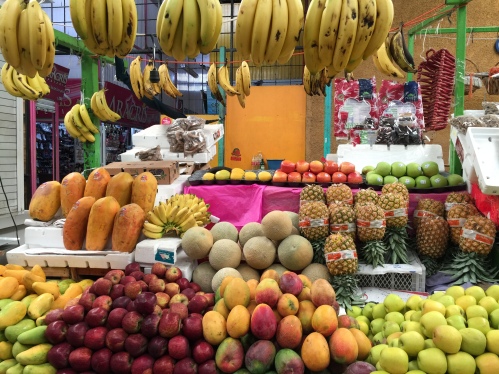 Dried herbs (it’s not what your thinking!)

Michael took us to many  great restaurants and again, unbelievably low prices.

There are ten universities in Morelia and thus, the city is teaming with young people.  Morelia is home to the largest music school in Mexico.   As we walked along the cobblestone streets of Morelia, music was pouring out into the streets from the many bars and restaurants. Of course we did some shopping and stocked up on Retin A, which you can buy over the counter in Mexico. I was able to get three more tiaras for crowning future road queens too! I bought a local designed and made purse for $40.

We needed much more time to take in all the sites and museums in Morelia.  I predict this won’t be my last time in Morelia.  Hear that Michael?  🙂

We decided to take the first class bus from Morelia to San Miguel de Allende.  The bus system in Mexico is excellent!  We even got half price senior rates.  A 4-hour bus ride in an air-conditioned bus with WIFI and movies was $139 pesos.  That’s $7.30 USD!  We keep picking our jaws up off the ground when we realize how inexpensive things are here.

San Miguel de Allende also has a large ex pat community of around 12,000. San Miguel is a small, mountain town at about 7,000 feet.  Learn more about San Miguel here.

We rented a three bedroom house up in the hills above the city center. Here is a link to the VRBO listing with photos of the house.  It was a fairly easy (considering the cobblestones) walk down to the center, however, the walk back up the hill to get home was another story, mostly due to the heat in the afternoon.  We liked getting the exercise, but I the highest heat of the day, it was not good.

This is actually a door!

One of the many street celebrations.  Mexicans have a celebration every other day!

When we first arrived, we hired a driver to take us to a grocery store for supplies for the week.  It’s quite a guessing game reading the labels and figuring out what we were buying. Of course, some things are obvious.  Others, like laundry detergent, etc. was not so easy.  Thank goodness for Google Translate!  I used that several times to communicate with non-English speaking people. We did accomplish our goal and had plenty to eat and drink at the house.  We ate one meal a day at a restaurant; from the street vendors to very nice restuarants.  We found San Miguel more expensive than Ajijic and Morelia.  It was also more crowded and less friendly than Ajijic.  Of course, we did our best to stimulate the local economy, yet again!

We visited the Toy Museum and marveled at all the hand made toys! Yes!  All handmade. 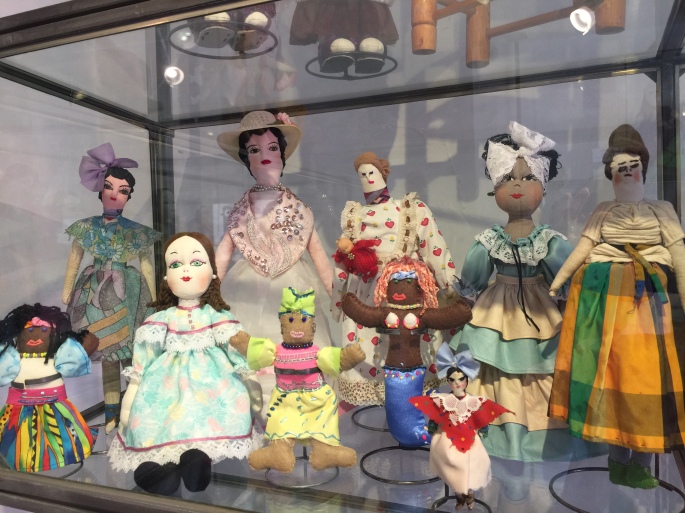 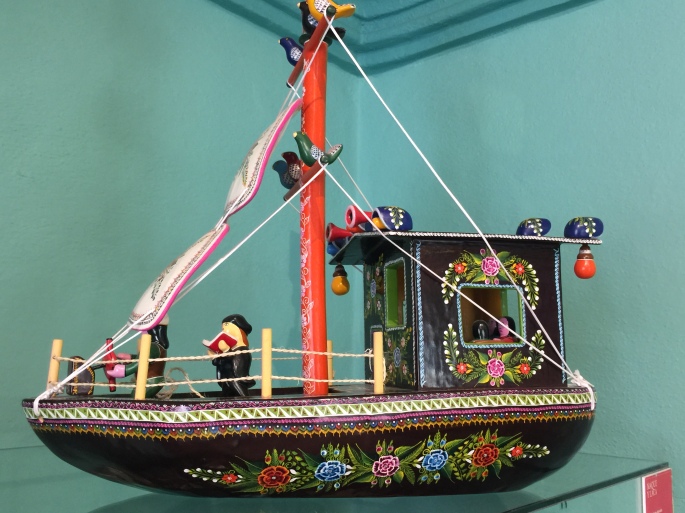 While dining at Hank’s Cajun Restaurant we ran into Pauline and Michael who had stayed at Casa Xola in Morelia. Pauline moved to Miami from Great Brittan in the early 70s.  Michael lives in Marbella, Spain.  We enjoyed their company in Morelia and even more so in San Miguel.  They invited us to join them on their hotel roof-top terrace, (very common in Mexico) for wine and cheese after dinner.  We had a great time getting to know them better and I know I’ll see Pauline again on my next visit to Florida.

It was a wonderful trip and I’m so glad I was able to check out the places I’ve been reading about for so long.  Will I be moving to Mexico anytime in the near future?  Probably not.  Will I visit again, maybe every for an extended stay?  I will probably go back to Ajijic again.

Here are a few things I learned on this trip

I returned to the Sedona area of another couple of weeks before heading north.  I just cannot seem to get enough of Sedona.